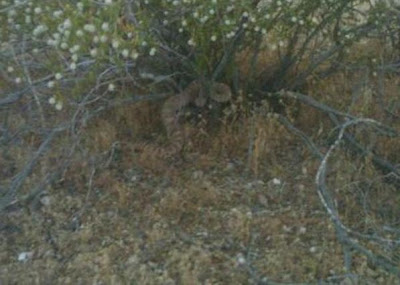 Look closely...I had almost stepped on it but I heard the hissss and grabbed my dogs and felt ill and scared shitless.
well fuck, turns out chi chi ran back after this asshole snake and was bit in the head. 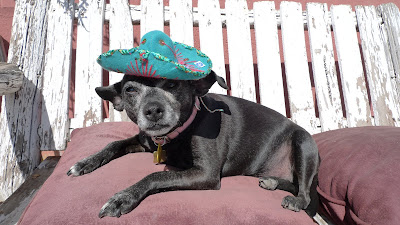 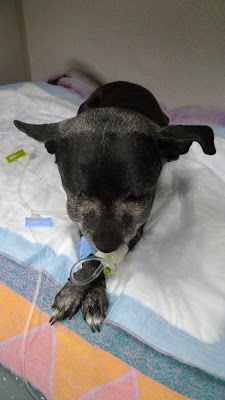 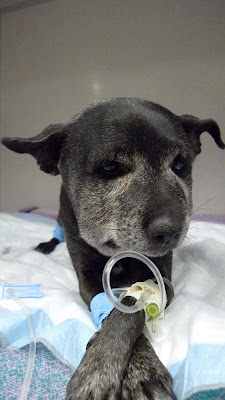 Grandmaster Flash said it best "It's like a jungle sometimes it makes me wonder
How I keep from going under"
Look at how big her head is from the bite.. my poor, poor baby. I wish it would have bitten me, I would have taken the bite for her. FUCK you rattlesnake. They said it was most likely a Mohave rattler and those are worse than a diamond back. She made it thru the night but the vet almost called me bcuz she was having a really hard time and almost didn't make it. Her clotting levels were off the charts and her blood pressure got really high. She's a fighter so I'm hoping she'll pull through it. I do not like emergency vet's I think they take advantage and overcharge you bcuz they know they can... they have to pay for all those fancy MAC computers some how. it was $600 for ONE anti venom shot!!! $229 for the IV fluid set up and $105 just for the visit... that's not counting all the other things they had to do-1st estimate $1,800!!. I need to say thank you to my best friend and husband for helping me out. They are the best.

****UPDATE**** She's stable and doing just OK.. they said her platelets or whatever are going up again and that she'll need another one of those $600+ anti-venom shots. I think I have the most expensive dogs in the world.. Right now i'd be able to buy a real nice motorcycle with the amount of the bill so far..but, Chi Chi is worth it.

Email ThisBlogThis!Share to TwitterShare to FacebookShare to Pinterest
Labels: FUCK YOU RATTLESNAKE

Wishing you both much luck. Vet bills hurt my pocket last month, but luckily my sweetie is still here and kicking. Rattlesnakes BITE!

Thanks guys. Ugh. I've cried a river...she's the sweetest lil dog ever...I can't fucking believe it. There's no way I'm losing two dgos in one month. The dr said the levels are off the charts and they are givng her anitvenom which alone is $600 a dose and her face is so swollen she looks like the guy from the mask. I will post pics. I hope she makes it through the night. I owe my best friend and her hubby for fronting the $1.333 bills so far. Ugh. Fuck people that overcharge to save your loved ones.

Oh no! I'm sooooo sorry! My little chihuahua had to have emergency surgery last summer and just leaving him there overnight made me sob....*crossing my fingers for ya!*

wow I had drank a bottle of wine by myself when I posted that comment above HA HA.. can you tell?

Thanks for all your kind words. She's a fighter and pulling thru so far.

oh no! hang in there chi chi!

Cindy I live in Vancouver Canada and I have had quite a few dogs(no Rattlesnakes here mind you) Do they have pet insurance down in Az? I pay 13$ a month and covers 80% of the bill. Anyway's sorry to hear about the little muffin, I'm sure that she will be all good.

Hi Joshua! Yes, they do have pet insurance, I don't tho. I'm lucky to have my best friend and her hubby they helped me out. Maybe i'll just move where there are no scorpions or rattlers or black widows. ;o) Thank you for your kind words

Wanna trade? I live on the beach and to tell the truth I would dig some dry heat and dangerous beasts to battle with! Love your site, to bad we don't have cool/beautiful women like you up here, I would be a happy guy...

Anyway love your blog, I read it everyday always some cool shit to check out..

Ok, let's trade.I'd love to live near the beach and get away from scorpions and snakes! Or i'll just come live with you so I can pay my friends back the $2,000 they have lent me so far for my dog. Thanks for the nice words/compliments ;o) .. they just called and they have to give her ANOTHER anti-venom.. $600 for each one they give her.. that's 2 so far.
I'm glad you like my blog, thanks for checking it out.

OHMY GOD. Nightmare. I'm so sorry. Your pup is worth it. How scary. Ugggggggggg.

this is bullshit. I've killed my fair share of snakes and the best way to take care of em I think is with a trusty little .410ga shotgun. full choke, break action, single shot. They even make one called the snake charmer (google it). You need this.

oh NICE! that's a good one. Prob is I think i'd have a better chance at killing it with a machine gun bcuz I don't know how good my aim is HA!! and yes.. this is total bullshit. I'm moving back to IL where there's only gardner snakes and banana spiders.

aww chi chi! give her a kiss for me!

Tell Chi Chi the boys down at the station are all pulling for her.

her poor little face!!! i'm so glad she's okay <3 what a hero for protecting you. chis are the best.