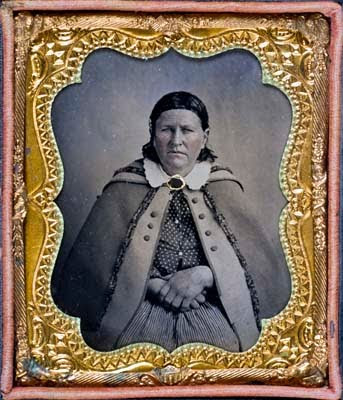 Her father had been killed by the Indians and she had been taken away as a 9 y.o in 1836 - she was rescued in 1860, but, by then, she had become more Comanche than white. She had 3 children, Quanah, Pecos and a daughter, Topasannah and had an Indian Chief , Peta Nacona, as her husband.

Her daughter died in 1864 and, after trying unsuccessfully to run away back to her Indian family on several occasions, she fell into a state of apathy.

Quanah, who had been born in 1845, had the distinction of being blue-eyed like his mother - but he had a darker complexion than his father.

The estimated number of Indians - which included Cheyenne, Kiowa and Arapaho warriors - attacking the post ranged from about 200 - up to 700 in some reports. Quanah had his horse shot from under him during the battle and was lucky to have survived.

Adopting his mother's surname, Quanah Parker later surrendered to the U.S. Army, in 1875, and went on to assimilate very successfully into the white man's way of life and became a prosperous businessman in Indian Territory (now Oklahoma). He spoke reasonably good English and Spanish and became a judge at the reservation court. He died in 1911 after serving as a leader of the Comanche, Kiowa and Apache confederation." via here check here out on NPR as well

great post. this is what i'm reading about alllll summer.

thanks.. i know, it's so interesting. i wonder what it was like back in the day to have a thousand buffalo running by as well. prob like thunder!

Very cool! I heard this report on NPR and was riveted. Kept me trapped in the car outside my house! Great blog...

This is so interesting.