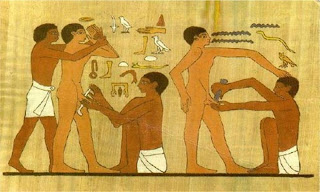 "Circumcision is an ancient bodymod that goes back further than recorded history. Some scholars believe it began in eastern Africa, long before Abraham made it a ritual of faith. It may possibly have been used to dampen sexual desire and pleasure. The practice spread to Egypt and the Middle East over time. In males, circumcision entails the removal of the foreskin from the penis, which can affect sexual pleasure, but does not destroy it. However, some cultures also practice “female circumcision”, which is actually genital mutilation, as it involves removal of the clitoris. This is done to prevent any sexual pleasure, and therefore prevent a woman from straying from her husband. The practice can lead to lifelong pain, sexual dysfunction, problems in childbirth, infection, and even death." via Neatorama