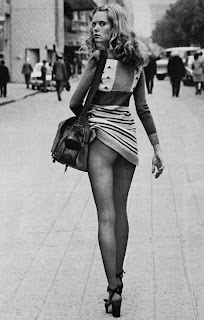 photo by June Newton (AKA Alice Springs) She was married to Helmet Newton. Pic via All Things Amazing

"Anásyrma (plural: anasýrmata), also called anasyrmós is the gesture of lifting up the skirt or kilt. It is used in connection with certain religious rituals, eroticism, and lewd jokes, see e.g. Baubo. The term is used in describing corresponding works of art. Anasyrma differs from flashing, a physically similar gesture as an act of exhibitionism, in that an exhibitionist has an implied purpose of his/her own sexual arousal, while anasyrma is only done for the effect on the onlookers.

Anasyrma may be a deliberately provocative self-exposing of one's naked genitals and/or buttocks. The famous example of the latter case is Aphrodite Kallipygos ("Aphrodite of the beautiful buttocks"). In many traditions this gesture also has an apotropaic character, as a mockery towards a supernatural enemy analogous to mooning." via wikipedia