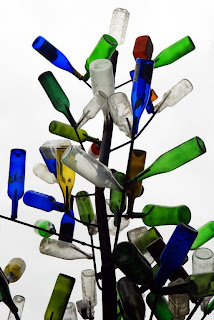 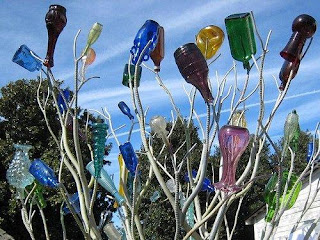 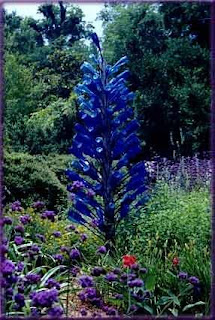 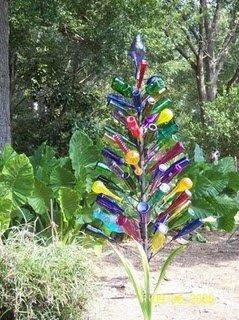 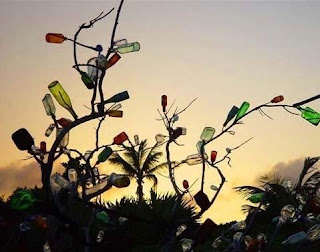 "The Origin of the Bottle Tree
Bottle trees have their roots in Congo culture. The practice was brought over by slaves who hung blue bottles from trees and huts as talismans to ward off evil spirits. It is believed that the spirits are dazzled by the colors of the bottles in the sun. Once they enter the bottle, they can't find their way out, much like flies. It is just as well, as they would prefer to remain intoxicated by the colorful prisms of color created by the interplay with the sun than wandering about haunting people.According to Wikipedia, "Glass 'bottle trees' orginated in Northern Africa during a period when superstitious people believed that a genii or imp could be captured in a glass bottle. Legend had it that empty glass bottles placed outside the home could "capture" roving (usually evil) spirits at night, and the spirit would be destroyed the next day in the sunshine. This practice was taken to Europe and North America by African slaves. While Europeans adapted them into hollow glass spheres known as "witch balls" the practice of hanging bottles in trees became widespread in the Southern states of North America, where they continue to be used today as colorful garden ornaments.Bottle trees have been featured as accessories in most of the prestigious flower show garden displays all over the world.Additionally, glass bottles, which have long been placed in windows for color ("poor man's stained glass"), are also commonly used to line flower beds."Via here
and teenangster blog.
I may have to start my own bottle tree now.