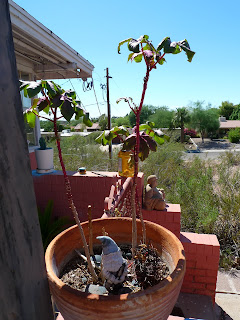 You see, this plant just started growing out of another plant I had at my old apartment. I had NO idea what it was.. I just kept watering it and wondered what the heck it could be. A few weeks ago I was at my friend Sonia's house and I saw a similar plant in her front yard and got excited and asked her what the heck it was-she said Castor Oil. WEIRD! So I looked it up and this is what I found-UGH! This thing is POTENT and VERY Deadly.. if ingested..

"The toxicity of raw castor beans due to the presence of ricin is well-known. Although the lethal dose in adults is considered to be 4 to 8 seeds, reports of actual poisoning are relatively rare.[6]. According to the 2007 edition of the Guinness Book of World Records, this plant is the most poisonous in the world.

If ingested, symptoms may be delayed by up to 36 hours but commonly begin within 2–4 hours. These include a burning sensation in mouth and throat, abdominal pain, purging and bloody diarrhea. Within several days there is severe dehydration, a drop in blood pressure and a decrease in urine. Unless treated, death can be expected to occur within 3–5 days, however in most cases a full recovery can be made.[7]

Poisoning occurs when animals ingest broken seeds or break the seed by chewing: intact seeds may pass through the digestive tract without releasing the toxin. Toxicity varies among animal species: 4 seeds will kill a rabbit, 5 a sheep, 6 an ox or horse, 7 a pig, 11 a dog, but it takes 80 to kill a duck.[8] The toxin provides the castor oil plant with some degree of natural protection from insect pests, such as aphids. In fact, ricin has been investigated for its potential use as an insecticide. The castor oil plant is also the source for undecylenic acid, a natural fungicide."

castor oil is also an old wives home remedy for everything from smoother skin to an upset tummy. I always have a bottle in the house.