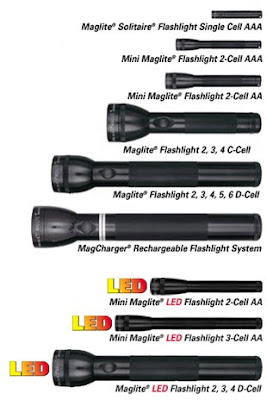 "So, how and why are Maglites still made in the U.S.?

Automation, bringing more and more production in-house, and having good patent attorneys is part of it. But it all comes down to the stubborn determination of one man — Anthony "Tony" Maglica, the company's founder.

"I will not go out of the country if my life depends on it," Maglica says. "There's no reason for it really."

Maglica is 79 years old and still comes to work every day, often before dawn. He walks the 700,000-square-foot factory floor, checking in on every detail of production.

Maglica was born into the Great Depression in New York. But he spent his formative years living in Croatia surviving hunger and worse as World War II tore through Europe. When he returned to America and set out to start his own company, he says, he had just $125. He has built a multimillion-dollar business, with more than 700 employees and customers all over the world." more of the story here on NPR

I found my maglite under a car in downtown Phoenix. I now use it to search for rattlesnakes when I walk out my patio door at night.. it's usually stationed right by my front door.

My father uses one on the force.
If not a light, it's a good weapon.

I own a few and am going out today to buy the whole fleet (if i can find them all). Motivating post! Thank You.

Jeremy-damn the whole fleet HA! Thanks for checking out my site. ;o)