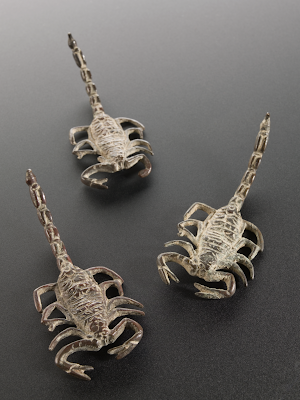 "Amulets in the shape of scorpions have been used since ancient Greek times to protect against potentially fatal scorpion stings. Some were worn on necklaces or attached to the outside of buildings. This bronze amulet was found in the ruins of Kashan, Persia (modern day Iran). Kashan may have been inhabited as early as the 600s BCE and was a major settlement in the 900s CE. After an earthquake in 1779, the city went into decline. The amulet is pictured here with two other scorpion-shaped amulets (A666040 and A666041). Amulets have long been part of most cultures across the world. They were, and for many people still are, believed to bring good fortune or good health and protect against bad luck, including sickness and physical danger." via here I might need to get one of these suckers.. do they make a rattlesnake one as well for my dogs?

these are amazing.
also in looking at your interests on your profile i think you could be my long lost twin. haha.

They are huh? I see real ones here and there in our house-EEEEK