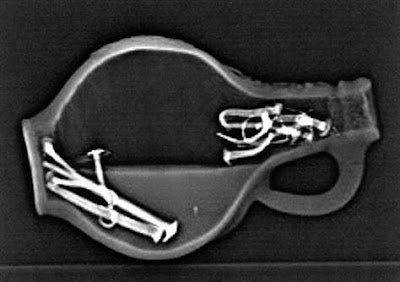 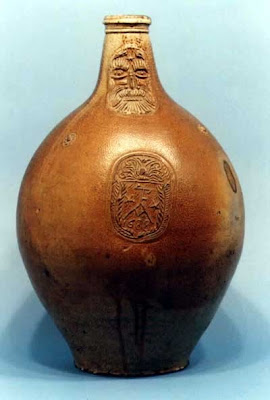 So Brittany told me about these "Witch Bottles" and how you can break a curse with them. She sent me this article as well.

"This spell device, often meant to attract and trap negative energy, was particularly common from the 16th to the 17th centuries, so the discovery provides a unique insight into witchcraft beliefs of that period, according to a report published in the latest British Archaeology.

An Old Bailey court record from 1682 documents that a husband, believing his wife to be afflicted by witchcraft, was advised by a Spitalfields apothecary to "take a quart of your Wive's urine, the paring of her Nails, some of her Hair, and such like, and boil them well in a Pipkin."

It's pretty interesting and so since I'm convinced my family has a bad luck curse on them I'm going to do it. I took an old Bell Jar and filled it with rusty nails, some chunks of my hair, some toe nail clippings, rosemary I snagged from a neighbors bush, pee (yes, HA I peed in the jar) and tonight I'll find the place to stick it in the wall of the new section of the house the landlord is building. It will be there for eternity and nobody will find it and hopefully this damn bad luck curse will be lifted! I'm a DORK!

Oh here's some more info from wikipedia
"A witch, cunning man or woman, would prepare the witch's bottle. Historically, the witch's bottle contained the victim's (the person who believed they had a spell put on them, for example) urine, hair or nail clippings, or red thread from sprite traps. In recent years, the witch's bottle has taken on a nicer tone, filled with rosemary, needles and pins, and red wine. Historically and currently, the bottle is then buried at the farthest corner of the property, beneath the house hearth, or placed in an inconspicuous spot in the house. It is believed that after being buried, the bottle captures evil which is impaled on the pins and needles, drowned by the wine, and sent away by the rosemary.

Another variation is within the disposal of the bottle. Some witch's bottles were thrown into a fire and when they exploded, the spell was broken or the witch supposedly killed." The whole article is here

Email ThisBlogThis!Share to TwitterShare to FacebookShare to Pinterest
Labels: break the curse