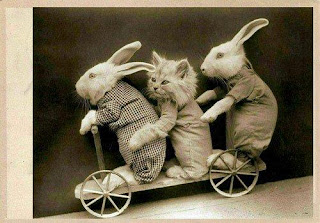 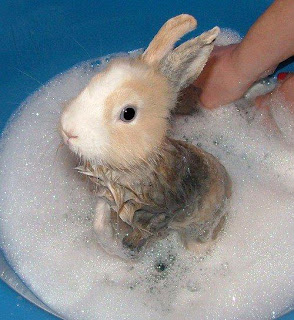 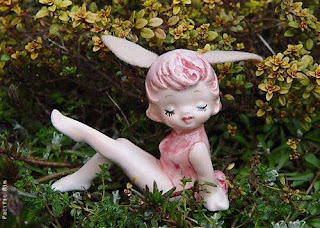 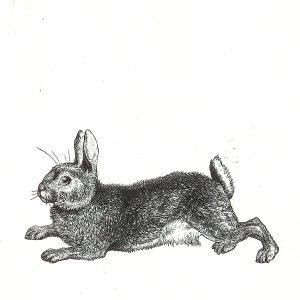 ""Rabbit rabbit" is a common British superstition. The most common modern version states that a person should say "rabbit, rabbit, white rabbit", "rabbit, rabbit, rabbit" or simply "white rabbits" upon waking on the first day of each new month, and on doing so will receive good luck for the duration of that month."
"

The exact origin of the superstition is unknown, though it has appeared in print at least as early as 1922:

However, some reports place its origins even earlier, into the 1800s. Today it has spread to most of the English-speaking countries of the world, although like all folklore, determining its exact area of distribution is difficult. This superstition is related to the broader belief in the rabbit or hare being a "lucky" animal, as exhibited in the practice of carrying a rabbit's foot for luck. Some have also believed it is representing a jumping into the future and moving ahead with life and happiness" from wikipedia

uhh, that's a pussy in between those bunnies!

ha.. i know, a bunny needs a pussy now and then too! meow meow, thump thump and a prrrrrrrrr..