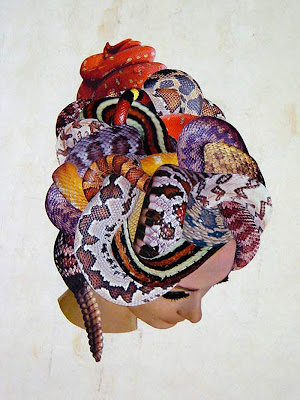 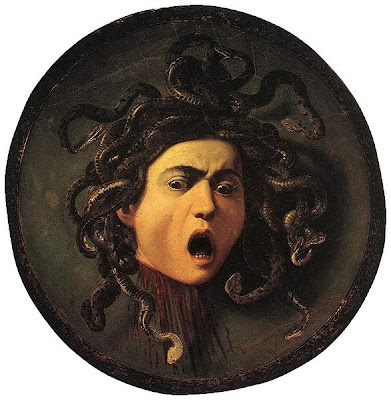 The painting above is by Carvaggio and it's my fav of Medusa. Top pic via All Things Amazing

"In most versions of the story, she was beheaded by the hero Perseus, who was sent to fetch her head by King Polydectes of Seriphos as a gift. With help from Athena and Hermes who supplied him with winged sandals, Hades' cap of invisibility, a sword, and a mirrored shield, he accomplished his quest. The hero slew Medusa by looking at her harmless reflection in the mirror instead of directly at her, to prevent being turned into stone. When the hero severed Medusa's head from her neck, two offspring sprang forth, for Medusa was pregnant by Poseidon: the winged horse Pegasus and the golden-sworded giant Chrysaor.
Perseus with the Head of Medusa, by Benvenuto Cellini, installed 1554

Jane Ellen Harrison argues that "her potency only begins when her head is severed, and that potency resides in the head; she is in a word a mask with a body later appended... the basis of the Gorgoneion is a cultus object, a ritual mask misunderstood."

In Odyssey xi, Homer does not specifically mention the Gorgon Medusa:

"Lest for my daring Persephone the dread,

From Hades should send up an awful monster's grisly head." " via wikipedia

Email ThisBlogThis!Share to TwitterShare to FacebookShare to Pinterest
Labels: medusa