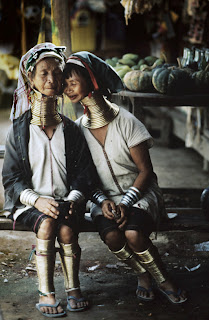 Kayan women with neck rings, Myanmar(Burma), 1994 They are also known as "Giraffe Women"
photo by Steve McCurry-see more of his work here

I bet those leg pieces will be in fashion soon..

The little girls get their first neck ring around 5 years of age.
"Each coil is replaced with longer coil, as the weight of the brass pushes the collar bone down and compresses the Rib cage. Contrary to popular belief, the neck is not actually lengthened; the illusion of a stretched neck is created by the deformation of the Clavicle. Many ideas regarding why the coils are worn have been suggested, often formed by visiting, who have hypothesized that the rings protected women from becoming slaves by making them less attractive to other tribes. Contrastingly it has been theorised that the coils originate from the desire to look more attractive by exaggerating sexual dimorphism, as women have more slender necks than men. It has also been suggested that the coils give the women resemblance to a dragon, an important figure in Kayan folklore.The coils might be meant to protect from Tiger bites, perhaps literally, but probably symbolically,Many women have removed the rings for medical examinations. Most women prefer to wear the rings once their necks are elongated, as their necks and collar bones are often bruised and discolored from being hidden behind brass for so long. Additionally, the collar feels like an integral part of the body after ten or more years of continuous wear." via wikipedia..