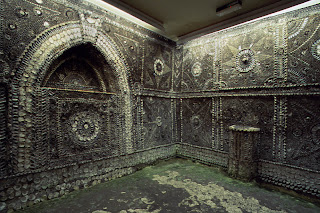 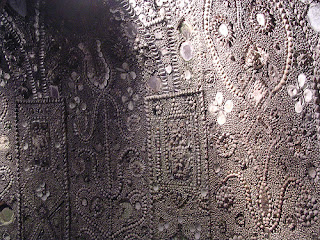 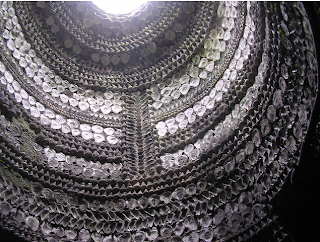 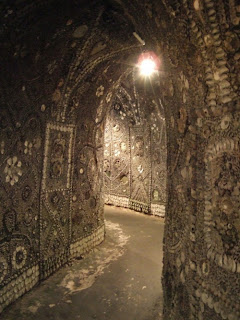 "The grotto was discovered in 1835 by James Newlove, who broke through into its roof while digging a duck-pond. It was illuminated by gas lamps and opened to the public in 1837, and has remained in private ownership ever since.
The age of the structure is uncertain and attempts to use radiocarbon dating to determine the age of the site have failed. Carbon deposits from Victorian lamps which were used to illuminate the grotto in the 1800s have entered the shells. Trying to analyse the mortar proved equally futile, it has so far defied analysis and all that scientists can ascertain is that the glue attaching the shells to the walls is "fish-based".
The Victorian gas lighting has blackened the fragile surface of the once-colourful shells, which are also under attack from water penetration. It is now illuminated by electricity. During World War II the east wall of the so-called altar chamber was destroyed by a bomb."... via wikipedia.. Holy COW is that neat. I wish I could discover something like this. I'd want to keep it a secret tho-secret FSK Society.