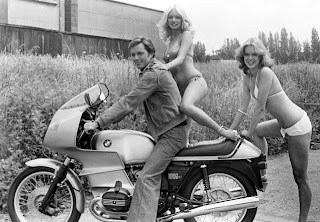 "But California man Henry Wolf got a little too excited about riding his new BMW bike, which he claims gave him an erection lasting 20 months – and counting.

Mr Wolf said that a four-hour trip on his BMW bike with a “ridge-like seat” gave him a persistent, lasting erection, and he is now suing the motoring manufacturer and seatmaker Corbin-Pacific.

There have been concerns in the past that narrow ‘banana’ bike seats could cause loss of feeling in the genitals of both men and women, but this ride seems to have caused the exact opposite effect.

In the Wolf v BMW lawsuit, it is claimed that the motorcyclist went for a ride in September 2010, and since then has suffered from a long-lasting erection that simply will not subside.

The lawsuit for emotional distress reads that Wolf is “now is unable to engage in sexual activity, which is causing him substantial emotional and mental anguish.”

He is suing BMW and Corbin-Pacific for lost wages, medical expenses, emotional distress and “general damage”.

The man puts his situation down to an extreme case of priapism – a condition in which the sufferer has a persistent and usually painful erection that lasts for a number of hours."