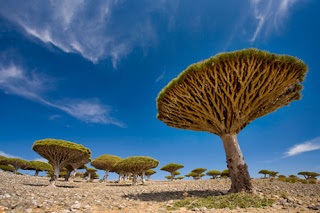 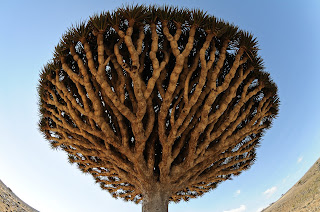 My new favorite Tree!!! Images from this google search
SO RAD!
"Dracaena cinnabari, the Socotra Dragon Tree or Dragon Blood Tree, is a Dragon Tree native to the Socotra archipelago in the Indian Ocean. It is so called due to the red sap that the trees produce

The Dragon blood tree is the most famous and distinctive plant of the island of Socotra. It has a unique and strange appearance, described as "upturned, densely-packed crown having the shape of an upside-down umbrella". This evergreen species is named after its dark red resin, that is known as "dragon's blood".[citation needed]
Unlike most monocot plants, the Dracaenaceae display secondary growth, D. cinnabari even has growth zones resembling tree rings found in dicot tree species. Along with other arborescent Dracaena species it has a distinctive growth habit called ‘Dracoid habitus’[citation needed]. Its leaves are only found at the end of its youngest branches, their leaves are all shed every 3 or 4 years before new leaves simultaneously mature. Branching tends to occur when the growth of the terminal bud is stopped, either due to flowering or traumatic events (e.g. herbivory).[4]
Its fruits are small fleshy berries containing between 1 and 3 seeds. As they develop they turn from green to black and then become orange once they are ripe. The berries are eaten by birds (e.g. Onychognatus species) and thereby dispersed. The seeds are between 4mm and 5mm in diameter and weigh on average 68 mg.[4] The berries exude a deep red resin, known as dragon’s blood.[5]
Like other monocotyledons, such as palms, the dragon’s blood tree grows from the tip of the stem, with the long, stiff leaves borne in dense rosettes at the end (4, 5, 7). It branches at maturity to produce an umbrella shaped crown, with leaves that measure up to 60 centimeters long and 3 centimeters wide. The trunk and the branches of the Dragon blood are thick and stout and display dichotomous branching, where each of the branches repeatedly divide in two sections."
via wikipedia.