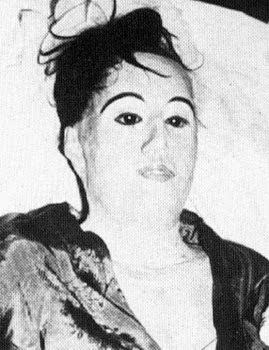 "In April, 1933, Tanzler removed Hoyos’ body from the mausoleum, carted it through the cemetery after dark on a toy wagon, and transported it to his home. He reportedly said that Elena’s spirit would come to him when he would sit by her grave and sing a Spanish song, he also says she would tell him to take her from the grave. Tanzler attached the corpse’s bones together with wire and coat hangers, and fitted the face with glass eyes. As the skin of the corpse decomposed, Tanzler replaced it with silk cloth soaked in wax and plaster of paris. As the hair fell out of the decomposing scalp, Tanzler fashioned a wig from Hoyos’ hair that had been collected by her mother and given to Tanzler not long after her burial in 1931. Tanzler filled the corpse’s abdominal and chest cavity with rags to keep the original form, dressed Hoyos’ remains in stockings, jewelry, and gloves, and kept the body in his bed. Tanzler also used copious amounts of perfume, disinfectants, and preserving agents, to mask the odor and forestall the effects of the corpse’s decomposition.
In October, 1940, Elena’s sister Florinda heard rumors of Tanzler sleeping with the disinterred body of her sister, and confronted Tanzler at his home, where Hoyos’ body was eventually discovered. Florinda notified the authorities, and Tanzler was arrested and detained. Tanzler was psychiatrically examined, and found mentally competent to stand trial on the charge of “wantonly and maliciously destroying a grave and removing a body without authorization.” After a preliminary hearing on October 9, 1940 at the Monroe County Courthouse in Key West, Tanzler was held to answer on the charge, but the case was eventually dropped and he was released, as the statute of limitations for the crime had expired." from here

strange love as the cramps would say.

How long did he keep that body with him? Do you think he did the nasty to it? Creeepy.