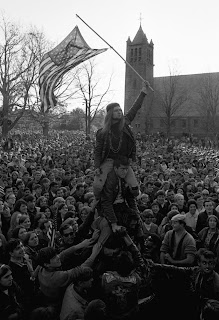 "Local members of the "Hell's Angels" motorcycle club form a human pyramid to wave flag and lead cheers at rally supporting American men fighting in Vietnam. A crowd estimated by police at near 25,000 turned out for the rally held this on October 29, 1967 on Wakefield, Massachusetts, common. (AP Photo/J Walter Green)" via this great site with LOTS of cool/heavy photos here

bloody hell!!, that link has some awesome pictures...