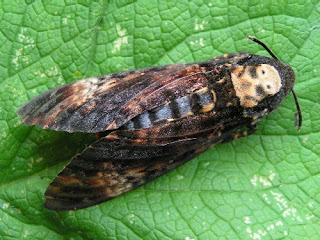 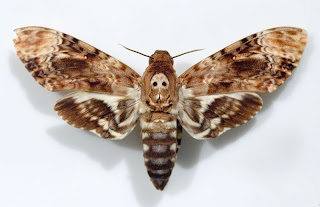 "The skull pattern has helped these moths, particularly A. atropos, earn a negative reputation, such as associations with the supernatural and evil.[2] The moth has been prominently featured in art and movies such as Un Chien Andalou (by Buñuel and Dalí) and The Silence of the Lambs, and in the artwork of the Japanese metal band Sigh's Hail Horror Hail album. The moth is also mentioned in Chapter 21 of Bram Stoker's Dracula, where Dracula has been sending the moths for Renfield to consume.

The species names atropos, styx and lachesis are all related to death. The first refers to the member of the three Moirae who cuts the threads of life of all beings in Greek mythology; the second to the river of the dead, also in Greek mythology; and the last refers to the Moira who allots the correct amount of life to a being. In addition the genus name Acherontia is derived from Acheron, a river in Greece that was believed in Greek Mythology to be a branch of the river Styx." via here

Email ThisBlogThis!Share to TwitterShare to FacebookShare to Pinterest
Labels: Cool