H.A. are Suing You and You and YOU! 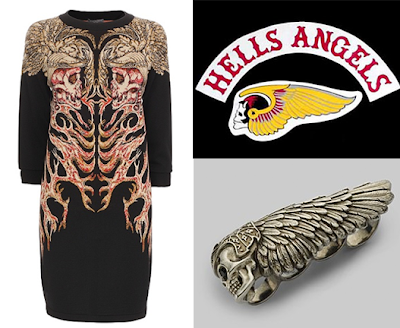 "The Hells Angels are suing Saks Fifth Avenue, Zappos.com and Alexander McQueen's brand for selling and creating items that contain their namesake and "Death Head" design. The retailers are being called out for selling McQueen's Hells Angels-based merchandise, such as a $495 Hells Four-Finger Ring, and a $1565 Hells Angels Jacquard Box Dress, which is still for sale on the designer's site." via here

...they didn't think at some point the Angels trademarked that design??...somebody done screwed up b/c that's pretty basic intellectual property law. Duuuuhhh ;)